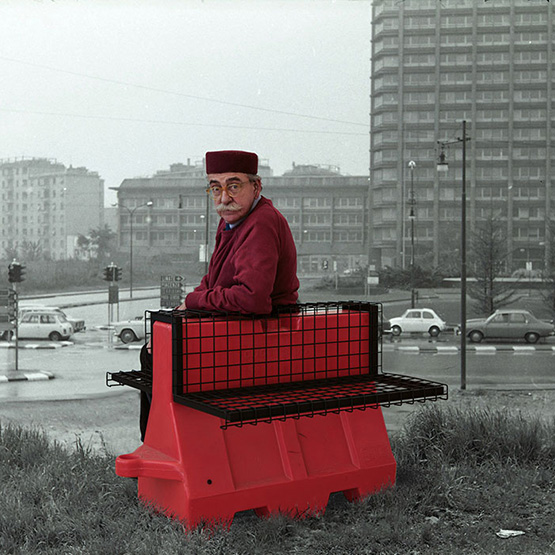 Born in Bussi sul Tirino (Pescara) in 1938, a native of Arpino (Frosinone), he lives and works in Milan where he graduated in Architecture at the Politecnico in 1964. An architect by training, he is an artist, filmmaker, editor, musician, cartoonist and teacher. He has been defininghimself as a researcher in communication systems and in visual arts since 1960, moving simultaneously in the worlds of art and design.

A tireless experimenter, he has crossed different currents (from Informalism and Conceptual Art to Narrative Art and artist’s cinema) and used multiple mediums, conducting research that were embodied in the theory of the “Disequilibrating System” – autonomous expression within Radical Design – and in important sociological themes such as “The Telematic Home” (MoMA, New York, 1972 – Fiera di Milano, 1983), “Real Space / Virtual Space” (Triennale di Milano 1979, 1992), “The eclectic Home” (Abitare il Tempo, 1990), “Beach Culture” (Centro Culturale Cattolica, 1985/95). He has transmitted his work through numerous exhibitions in Italy and abroad, and he has curated several exhibitions at the Triennale di Milano, the Venice Biennale, the Musée d’art contemporain de Lyon, the FRAC Centre in Orléans, the International Museum of Ceramics in Faenza, the Fondazione Ragghianti in Lucca, the Fondazione Mudima in Milano and the Museo MA*GA in Gallarate. He has always critically maintained the humanistic, significant and territorial components of design through his works and objects, as well as his work in teaching, theory and publishing.

Since 1964, he has taught at many architecture departments and design and art institutes all over Italy.

1959/60 He began “sign research” in painting, aimed at salvaging of the “Minimum symbolic experimentation”. 1962 With A. Ferrari, E. Sordini, A. Verga and A. Vermi, he founded the Gruppo del Cenobio. 1968 He designed and created the “Audiovisual Environment” at the XIV Triennale di Milano. 1969 He won the following prizes for painting: I° Premio Termoli, II° Premio Joan Miró, I° Premio Cesare da Sesto 1972 He took part in the “Italy: The New Domestic Landscape” exhibition at MoMA with “La cellula abitativa;” 1976 He took part in the XXXVII Venice Biennale in the “Environment as society” section (E. Crispolti). 1978 He took part in the XXXVIII Venice Biennale in the following sections: “Artist’s cinema” (V. Fagone), “Utopia, the crisis of the architecture. Radical Architecture” (L.V. Masini). 1979 He won the Compasso d’Oro with the project “L’occultamento.” He curated the “Real space / Virtual space” exhibition at the Triennale di Milano 1981 He co-curated the “Scenographic space in the Italian television” exhibition at the XVI Triennale di Milano. 1992 He curated the “Life between things and nature” section at the XVIII Triennale di Milano 1997 He organised the personal exhibition “Fragments,” at the Fortezza da Basso in Florence. 2009 FRAC Centre in Orléans dedicated a personal exhibition to his architectural works from the 1960s and 1970s; 2011 He presented the exhibition “Living the city. Yesterday’s future, for a new territoriality”, at the Museo MIAAO; 2012 Fondazione Mudima dedicated a personal exhibition to him entitled “Living in Milan” which collected his works and interventions in the Milan area. 2014 Triennale Design Museum in Milan dedicated a personal exhibition to him entitled “Ugo La Pietra. Disequilibrating Design” curated by Angela Rui. 2015 He took part at the exhibition “Earthrise” at the PAV in Turin invitated by Marco Scotini. 2016 He won the Compasso d’Oro for his Career. 2017 He realized two solo exhibitions “Territori” at Galleria Bianconi in Milan and “Campo Tissurato. I segni e l’urbano” curated by Marco Scotini, at  Studio d’Arte Dabbeni in Lugano. 2018 He participated at “Artissima” (new section called “Sound”) with Studio Dabbeni Lugano with his historical work “Audio casco” (1967) for which he received a honorable mention form the OGR Award jury.